The Townhouse know how to do weekend stays.  They understand the desires of a customer over the stereotypical stuff we are expected to want from a hotel stay, but never actually do.  Fluffy bath robes are out, a decanter full of port is in, because anyone sane would take fortified wine over post-shower warmth.  Nespresso machines and tea pots.  We get oversized mirrors and showerheads, both of which are ideal for my massive head.  It’s a details place, that much is obvious, with tasteful, well appointed rooms.  It is one of the better places I have ever stayed in, and this was before they gave me two breakfasts the following morning. 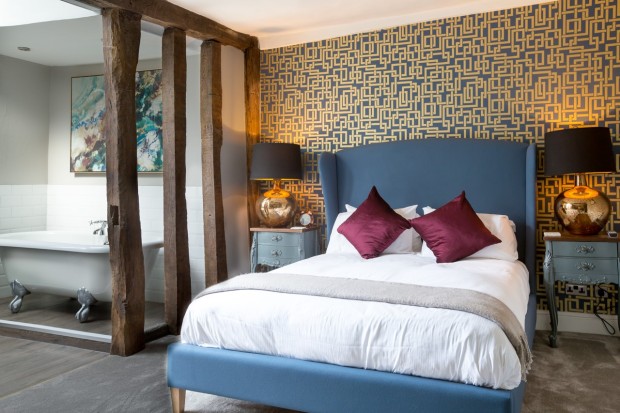 But I’m a restaurant blogger (award winning, would you Adam and Eve it), so lets get down to the nitty-gritty.   The restaurant here is adjacent to the bar, a warming space of dark woods and moss green.  On the evening we are here there is a band on, a thought that had me running for the hills until the opening chords of TLC’s Waterfalls played.  In truth, it sits very comfortably between those locals who know the quality to be had here, and for those visiting this town who have took a punt on the website and central location.

I have no problem in saying that the food far exceeded our expectations, which isn’t to say that those expectations were low, just that we wasn’t expecting a couple of dishes to knock us sideways.  A scallop starter would be one of those dishes.  The mollusc has been cooked with a blow torch only so that the centre was rare and the outer a speckled black.  The circular plate design was a pretty as a Gainsborough, the base formed of sweetcorn puree, for which the scallop, chorizo, and broad beans were placed on top.  It’s cohesive in flavour and thankfully not overly sweet as mind imagined, it is a grain of salt on each scallop from being something astonishing.  If any dish shows their desire for accolades it’s this.

Another starter was far simpler in construction.  Potted duck features all of the bits of the animal that require patience and plenty of rendered fat to make tasty, pulled into a jumble and pressed back into a jar.  On top is a fig chutney that is sweet and warming, on the side is an apple salad.  The eating is a simple process of smearing it all thickly on to bread.  It’s an honest bit of food that would comfortably feed one with a pint of beer at lunch.

A chicken main has a well cooked supreme, with chick peas, a little chorizo and courgettes.  It’s nice, but it’s crying out for more acidity.  A big squeeze of lemon juice to tie it all together or… or… this caponata side dish that went a little too well with the chicken.  Once combined the dish took on a new persona, one a little more shouty and naughty.

The other main didn’t need the caponata for attitude – it had bags of the stuff.  Pork loin cooked so that it was blushing, with discs of black pudding and apple, new potatoes, and the kind of sauce I would run off with, had doing so twice in one year not been so frowned upon.  The sauce itself was a reduction of the hardy bits of pig, a little cream, some mustard and finished with chives, that held everything together in one big hug.  My partner, heaven forbid herself a food blogger, called it one of the best things she had eaten this year.  For once, she was not wrong. 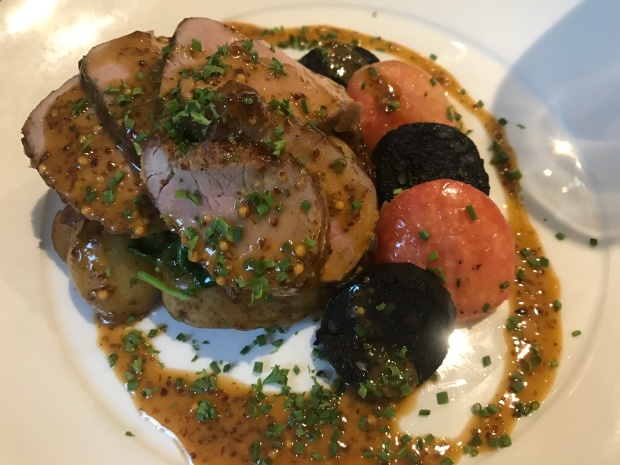 Desserts were nice enough, though an obvious area for improvement given the quality served before.  A “‘neatened’ mess” was exactly that, a kitsch looking collection of strawberries and cream which were a vehicle for a pleasant meringue crown.  I preferred the treacle tart with clotted cream, which had a good depth of flavour.  In my opinion, the sugar content for both could have been reduced, but it’s worth noting that I do not have the sweetest of teeth.

We drank with this a very nice Gavi from a very fair wine list.  After we sauntered into Stratford and then decided that we liked it more back where we were, and made our way into the bar to watch the last of the music.  The Townhouse is that kind of place – approachable and friendly, perfectly pitched at it’s cliental.  It also has a kitchen that is capable of some serious cooking; there are places not as competent as this locally with two rosettes, so this should be their aim.  For mid-priced dining in Warickshire, I can think of nowhere I would recommend more.

I was invited to stay at The Townhouse by Shakespeares England.  For more information please see http://www.shakespeares-england.co.uk

My Tweets
Follow Meat and One Veg on WordPress.com